Field Sobriety Tests are NOT Accurate in Determining Driver Impairment 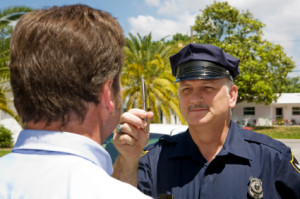 Field Sobriety Tests (FST) were designed by the National Highway Traffic Safety Administration (NHTSA) to provide police a standardized means of objectively assessing impairment.  FST were originally developed to help  police screen a driver for probable cause to make a DUI arrest.  FST are poor indicators of sobriety.  FST have been used for decades despite study after study which has shown an inherent error in the subjective scoring procedure.  In a 1977 study, researchers learned that over 45% of subjects who ‘failed’ FST based on their test performance actually had a blood alcohol concentration less than the legal limit.  In a 1981 test researchers discovered that 32% of subjects who failed the FST actually had a blood alcohol content under the legal limit.  Research on the validity and accuracy of FST conducted in a 1991 at Clemson University showed that FST yielded false results.  In this study 21 sober individuals with a blood alcohol content of 0.00 were videotaped performing 6 standard FST.  The videos were then shown to 14 police officers.  The officers were asked to determine if the individuals had too much to drink to safely drive a car.  The officers were not told the individuals had not consumed any alcohol.  The officers found almost one half (46%) of the (sober) individuals were too drunk to drive.

Additionally, officers often do not administer the FST correctly.  An officer’s failure to administer the FST in the uniform way invalidates the results.  Officers do not take in consideration whether nervousness and other distractions can effect a person’s FST performance.  The 3 primary FST are:

Nystagmus is the rhythmic back and forth oscillation of the eyeball that occurs when there is a disturbance of the vestibular system of the eye.  HGN is an involuntary motion.  A person cannot control a nystagmus.  A nystagmus is the bouncing of the eye, it does not affect a person’s vision.  Alcohol can cause nystagmus because alcohol in the bloodstream causes a vestibular disorder.  Caffine, nicotine, aspirin and fatigue can cause nystagmus.  In a HGN test the suspect follows a stimulus with his eyes.  The officer watches each eye follow a stimulus and watches for smooth pursuit.  A Nystagmus prior to a 45 degree angle and a nystagmus at maximum deviation is an indication of impairment.  The test is administered in 2 passes, so a total of 6 clues (3 for each eye) are possible.  A minimum of 4 clues are needed to determine impairment.

The subject stands in a heel to toe fashion with arms at his side while instructions are given.  The subject must take nine heel to toe steps along a line.  All of this must be done while counting the steps aloud and keeping arms to the sides.  The test requires a designated straight line and a dry hard level surface.  At the ninth step the subject must use a series of small steps to turn around and walk back to the starting point.  The walk and turn has 8 clues of impairment:

Two or more clues classify the subject’s BAC is over 0.10

This test requires the suspect to stand on one leg.  The other leg is to be extended in front of the suspect in a stiff leg manner, with the foot held approximately 6 inches above the ground.  The suspect is to stare at the elevated foot, and count aloud until told to stop, in this fashion: “one thousand one, one thousand two…”  This test requires a reasonably dry hard level non slippery surface.  The test lasts for 30 seconds.  The one leg stand has four clues of impairment:

Two or more clues classify the subject as a 65% chance of being over a 0.

For an experienced DUI Lawyer that can defense you the way you deserve to be defended call now.